Whether pick-by-light, emergency lighting or visualization of driving movements in self-driving systems (AGV) – LED Stripes are increasingly used in various applications. Why should you control your LED Stripes with ASi-5? Because our flexible Control Modules offer so many configuration options – including up to 4.2 million colors. And because you also benefit from all the ASi advantages, such as up to 70 percent lower wiring costs compared to round cable solutions. With our new ASi-5 Active Distributors for LED Stripes you can easily control almost all common (digital) LED Stripes thanks to the separate RGB and RGBW profiles – because the configuration is done via the cyclic data. Another advantage: The modules allow a flexible connection of the LED Stripes and are supplied out of AUX. 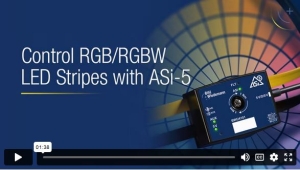 Standard LED Stripes can manage all LEDS simultaneously. The control for color and brightness is thus done directly on the four wires (+) (R) (G) (B). This is made possible by the three PWM channels. All LEDS are connected to each other in a cascade.